Ever since I came back to music photography, there was one band that I’ve been dying to shoot again. I’ve been a fan and supporter since their humble beginnings. It was the band that I pretty much grew up with since the members and I are roughly the same age. It was the only band that I could honestly say made me fall in love with the local music scene. They have become my white whale. My sort of Holy Grail.

Not to say that their gigs are rare. They’re still active in the local scene. But with the years of experience they’ve amassed, their listeners multiplied. In those early days, I could still move freely in the venues they’d play at. I could still shoot. I could still breathe. My anxiety issues could still manage. In recent years, however, the venues are sold out. The bars are packed. One can barely move an inch.

So coming to their gigs were sporadic, at best. In the past year, I’d seen them, well, once. I went to their gig December of last year. Paid the door charge and all. Couldn’t get inside the venue anymore. The band recently had a gig at Checkpoint Rock Bar. As expected, the venue was packed. The crowd spilled outside, waiting for the opportunity to get in. I texted a friend of mine who works as a photographer for Checkpoint if he can get me and my ex inside. He did. But we left immediately as it was too crowded. Moving an inch would be a luxury. And I even intended to shoot them.

I’d still to their gigs if it was not for my anxiety attacks. Two days ago, an opportunity presented itself. They had a gig at a new bar near my place. The entrance fee was 800 bucks. EIGHT HUNDRED FREAKING BUCKS. I don’t have that much money to spend for a door charge, but I knew that with that amount to get in, the crowd wouldn’t be as massive as per usual. And so I messaged Los, the band’s guitarist, if he could get me in free of charge. He once said years ago that I didn’t really have to pay door charge on their gigs anymore. But I still had to ask, right? And besides, even though I could get in for free, I still paid when I still went to their gigs. It’s my way of supporting the band, the record label, and the venue.

Anyway, he said yes. And that’s how I finally got to shoot my white whale.

I’ve thought of doing a photography project some time ago. I’d take (shotgun) portraits of my favorite local musicians/bands/singer-songwriters. It’s always been at the back of my mind. Kept putting it off because portraits require Talking. To. People. Talking to people isn’t my strong suit. Verbal communication isn’t my strong suit. It would be if I wasn’t a stutterer.

The night before I finally got to shoot Up Dharma Down, I thought of asking the band if I can shoot portraits of them. I wasn’t really thinking of my photo project. I thought, “hey, why not! Might be fun!” And I did get to do it. Stuttering issues be damned.

It wasn’t until I processed the portraits when I realized “shit…I finally got to start that damn project.” And it’s with UP DHARMA FREAKING DOWN!!! THE band I’ve always loved and admired for almost ten years now. Other people pledge allegiance to Eraserheads. Others to Wolfgang. They consider those bands as the people who soundtracked their lives. Up Dharma Down is that to me. I’m a proud Dharmalite. And they were the first ones I got to shoot portraits of. Couldn’t be more ecstatic right now.

I think the band liked the outcome. Armi, the vocalist, reposted the set on her Instagram and, as of posting time, it’s racked up 1,124 Likes. I also posted the portraits on my personal Facebook account. Tagged them and everything. Which, in hindsight, was a mistake as I should’ve posted it on my Infinity Blues Photography Facebook page first so I’ll get more traffic and possibly more Page Likes.

I didn’t quite realize just how big of a deal it was, shooting portraits of them. A young photographer I’ve made friends with implied on a Facebook comment he made on that post that shooting portraits of them was huge. I mean, yeah, I do know that they’ve got an inherently massive following and are famous, but hey, all I did was ask. I don’t know, maybe they said yes because they’ve known me a long time. Kinda realized that I should have asked their manager, Toti, first though. 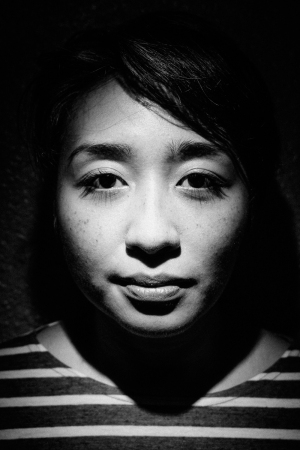 The second session of that little project of mine happens tomorrow at Checkpoint. I’ve known for a while now that April Hernandez, who goes by TheSunManager, is playing there. She’s on my list for the project. I already Tweeted her asking if I can take a portrait of her. She said yes!

Then as if fate was finally on my side, another favorite of mine, Gabe Piolo, is also on the lineup for tomorrow’s gig at Checkpoint. I consider it fate as those two were the ones I handpicked to perform at Luna when the music production duo I was part of still got acts for the venue. It was the first time I got to book performers so I picked my favorites. I also inserted myself in the lineup that night so, in a way, I shared the same stage with them! Haha!

I already asked Gabe if I can take portraits of him tomorrow and he said yes!

The past few days have made my worries about what I’m doing now, music photography, a bit less troublesome. I realized the other day that what if the reason why I don’t feel the same happiness I felt when I was still singing is because my mind is stuck on the version of happiness I felt late last year? But, I don’t know, the rush I get when I’m shooting is too different as when I’m singing. Almost every demon I have is rooted on my stuttering, and when I’m singing, the demons go away. I get to be the person I’ve always wanted to be.

Eh. I should take every single good thing I have right now and put those in that box where I keep my demons. Let them fight it out. And so far, there’s a lot of them. I’ve become the official unofficial photographer for Checkpoint, and with that title, I get in for free at their gigs AND I get six free beers! Two of my photos made it inside an album inlay! After months of wanting/needing/desiring to shoot Up dharma Down, I finally got to! I unwittingly started the photo project I’ve been keen on doing, and with Up dharma Down as my first subjects! The bands I shoot like the photos I took of them! Not that I need validation, mind you. But it feels good to be appreciated once in a while.