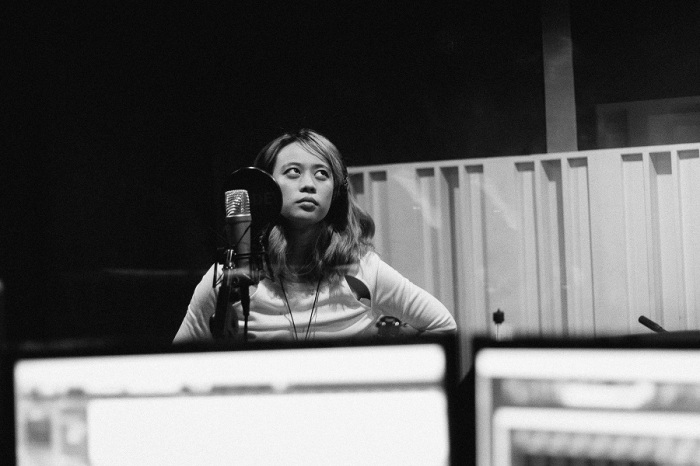 One of my things on my music photography bucket list is to take photos of a music recording process. We listen to the songs on our laptops and iPods and phones and other devices. We hear them live on bars and cafes and arenas. We digest the recorded song in its entirety, often getting lost in it once it starts. And when it ends, as all things do, we’ve become just a tad bit better persons.

I had the opportunity to photograph a recording session of local singer/songwriter Reese Lansangan. It was an assignment of sorts as I’m part of her documentation team for her upcoming debut album. Documenting the recording process was one of the reasons why I applied to be part of the team. Aside from me being a huge fan of hers, of course.

The studio wasn’t what I’d expected coming in. It was digital. I wanted to photograph a whole panel of knobs and switches that makes a song a song. But it didn’t matter, really, once I got there. I was on assignment and opportunities like that are rare for me. Take what you can get, right?

I enjoyed the assignment. Got shots that I really like. I hope Reese likes them, too. I don’t really know if it captured her essence, but I realized earlier this afternoon that I tend to capture the drama in the music photos I take. Anyway, I post processed about a quarter of the photos in color. (STILL STRUGGLING!) But it’s alright.

Reese was a total darling all night. The paragon of professionalism. The sound engineer took cues from her and she knew what she wanted to hear, knew what she wanted from her song “Creeper.” (it was my LSS for the whole night!) Watching her in the studio that night left me awestruck. On my write up for this year’s Fete dela Musique’s Acoustic Stage, I wrote

“Indie doll Reese Lansangan, whose sugary sweet vocals and undeniable charm, pulls the audience’s eyes and ears towards her; her presence alone has its own gravitational pull.”

That much is true. The lady’s got a magnet somewhere inside her.

It was an extreme honor to have been there. When the song “Creeper” hits the interwebs, I get to say “I was there when it was recorded. I got to see the magic behind the song. I got the capture the magic in still life.”

Her album comes out December of this year. Do take a listen to it when it comes out. From what I’d heard at the recording session and from her live gigs, it’s gonna be a great one.

PS. I can’t upload the whole set yet until after her album launch, but I’m permitted to post them individually as a promotion of sorts, I suppose.

6 thoughts on “The Gravitational Pull of Reese L”